The history of the Reading & Columbia Rail Road started with the Philadelphia & Reading Railroad Company chartered April 4, 1833 by an Act of the Pennsylvnia Legislature. This is part of a complex story that began locally in 1857 with generated interest in a railroad between Reading and Columbia. 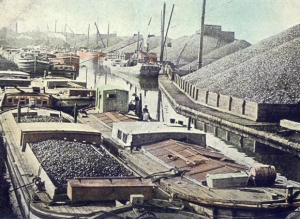 A group of influential citizens from Lancaster and Berks Counties secured passage of a charter creating the Reading & Columbia Rail Road Company which was signed by Governor James Pollock on May 19, 1857. By December 1860, the survey and location of the R&C route was completed. It was decided that Sinking Spring, where a connection could be made with the Lebanon Valley Railroad, would be the starting point and the line would run by the way of Reinholds, Stevens, Ephrata, Akron, Millway, Rothsville, Lititz, Manheim, Landisville, and onto Columbia—a distance of 39.8 miles. Although the major construction was started at the Columbia end of the line, the actual ground breaking for the R&C was completed March 28, 1861 at a gap in the South Mountains about 4 miles south of Sinking Spring.

The first Lititz passenger depot and express station was located on the north side of the tracks along Broad Street, which is the present site of Wilbur Chocolate Company. The depot was dedicated December 26, 1863, with the arrival of the first passenger train.

Following the completion of the railroad between Columbia and Sinking Spring, a special train carrying officials and invited guests made the first trip from Columbia to Reading on March 15, 1864. A morning train from Reading, and an afternoon train from Columbia, inaugurated the first regular passenger train schedule between Columbia and Reading April 1, 1864. Six passenger trains a day would stop at Lititz during their route to Reading or Columbia. Extra revenue was earned by the subsidized mail and railway express items that the trains carried.

The first railroad to reach Columbia, the Philadelphia and Columbia Railroad, was part of the state-built Main Line of the Public Works of Pennsylvania. The 82-mile like was completed in April, 1834, but not officially opened until October 7, 1834.

The Pennsylvania Railroad appeared in the 1850’s and quickly became a major industry in Columbia.

The Pennsylvania Legislature passed an act on April 13, 1846 incorporating the PRR and allowing it to build a line between Harrisburg and Pittsburgh.

In 1850 the company completed a line down the east shore of the Susquehanna River to Columbia and the P&C. On December 10, 1852, the first through train ran between Philadelphia and Pittsburgh using the P&C and PRR facilities.

The railroad soon took business from the state-owned canal system, which ran parallel to the tracks, and in 1857 the canal system was purchased by the PRR. The purchase included the P&C line.

Baltimore interests started a railroad in the 1820’s, the Baltimore and Susquehanna, to meet the Pennsylvania Public Works canal system. That new line made it to Wrightsville in 1840 and in order to cross the river to Columbia the railroad laid tracks on the bridge which was built in 1834.

That bridge was burned in 1863 to prevent Confederate forces from crossing the river and trains did not cross the river again until 1869 when the Columbia Bridge Co. built a replacement covered bridge. The PRR bought the Wrightsville, York and Gettysburg line in 1870 and the bridge in 1879.

The PRR expanded rapidly in the 1870’s. The railroad station was relocated from the Washington House, at Front and Walnut Streets, to its present site on the opposite corner of the same intersection; and in 1872 saw the construction of a 360-degree roundhouse north of the present Bridge Street.

Soon the PRR had three yards in town: No. 1 or the East Yard, on the old P&C line near Fourth and Manor Streets, had a 13-stall, 180-degree roundhouse; No. 2 was on the Columbia & Port Deposit line and ran parallel to front Street; and No. 3 was west of Second Street, north of Bridge Street. It contained a major shop complex, coaling facility and water reservoir, and the 360-degree roundhouse.

When an 1896 hurricane destroyed the bridge over the river, the PRR had a replacement assembled in 21 days on the old piers a year later. This was one of the first prefabricated structures built in the United States. Originally the railroad intended the bridge to have two decks, the lower for trains and the upper for other traffic. The top deck was never added and cars and trains shared the planked lower deck until the Rt. 462 bridge was completed in 1930.

During 1904-1906 the PRR built the Atglen and Susquehanna Branch, a double track railroad which ran parallel to the Main Line from Parkesburg, PA, to a new yard at Enola on the west side of the river, opposite Harrisburg. When the Enola yard opened the PRR moved many jobs there thus decreasing the work force at the Columbia shops, roundhouse and yards.

During the Depression of 1938 the PRR electrified the Columbia Branch, from Columbia to Lancaster, the A & S and the C & PD lines. This came at the right time since World War II would son break out, and without electrification it was doubtful that the PRR could have handled the freight that it did through the town.

At one time the PRR ran passenger trains in four directions from Columbia: east-west between Lancaster and York, north to Middletown and south to Perryville, MD.

But the hard times in the 1930’s stopped service to Middletown on November 29, 1931 and Perryville on April 15, 1935; and when east-west runs ended on January 4, 1954 the railroad was using a single gas-electric car often called a “Doodlebug” between Lancaster and York.

In the early 1970’s Amtrak, the National rail passenger corporation, ran passenger trains between Washington and Harrisburg through Columbia but they did not stop at Columbia.

From the Civil War to the turn of the century the Shawnee Furnace refined iron ore at Fifth and Union Street, near the Shawnee Creek; and ran its own transportation system–the Shawnee Railroad. Much of the railroad ran near the creek where the engines hauled cars loaded with finished products and waste.

In 1857 the Pennsylvania General Assembly approved an act incorporating the Reading and Columbia Railroad Co. The railroad was to run from Columbia to connect with the Lebanon Valley Railroad between Sinking Spring and Reading.

Construction crews completed the company’s first division, Columbia to Manheim, by January 1, 1862 but a labor shortage during the Civil War delayed a connection with the Lebanon Valley company until March 31, 1864.

By 1866, the R&C had its passenger station in Carpet Hall, at Front and Locust Streets; but by the 1880’s passenger business had grown enough that a new passenger station was built at the same site. Designed by noted Philadelphia architect, Frank Furness, the two story structure combined “Queen Anne” and “Eastlake” styles with company offices on the second floor, while spacious waiting rooms and a large open fireplace with a Minton tile hearth were on the first floor where passengers boarded trains under a protective train shed.