Reginald embraced socialism and secular humanism about the time he entered Harvard. Although raised Episcopalian, he intellectually explored Mormonism, yet later actually joined the Russian Orthodox church, where he took the name ‘Basil.’ Some references suggest this was more a maneuver than an act of faith.

Reginald Wright Kaufman was a nephew (through marriage) of Samuel Wright, Esq. Samuel and his wife Ellen (Anne’s sister) lived in Anne’s household on South Second Street in Columbia and continued living there, after Anne’s passing, until they their deaths.

Upon graduating from Harvard in 1900, Reginald moved to Philadelphia with his first wife, Ellen, and one child. In 1911, in his introduction to The Girl That Goes Wrong, Reginald refers to having lived in a great many places both in the US and Europe. He and his wife barely supported themselves by writing sporadically for periodicals and newspapers.

Around 1910, Reginald and his new wife, Ruth, lived with Anne, Samuel, and Ellen at the same South Second Street house in Columbia (house next to the old Columbia Hospital).

Always willing to move where the work was, Reginald held the post of Editor of the Bangor Maine Daily News. And, only recently, it was discovered that he was an accredited correspondent with the United States Navy, and a member of La Société Académique d’Histoire.

Reginald Wright Kaufman went on to write numerous books, some of which were made into movie screenplays. And, although difficult to pin down, it’s said that some of his books, although fiction, refer to locations in and around Columbia.

View his Hollywood movie credits on the Internet Movie Database.

View a select list of his books on Amazon. 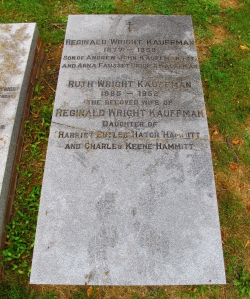 Should you happen to possess information, photographic images, or other artifacts of R.W. Kauffman, we would be most interested to hear from you.